An oasis of green in the centre of Cirencester, Querns Wood is a miniature network of paths connecting The Amphitheatre to Four Acre Field and Cirencester Hospital.

Alive with bird song and the scurry of squirrels, Querns Wood is a natural haven worth exploring.

Take a stroll through Querns Wood

Whether you’re a visitor to Cirencester or your morning commute takes you from Chesterton Lane down into town, leave town life behind for a little while in Querns Wood and discover a few hidden details along the way. 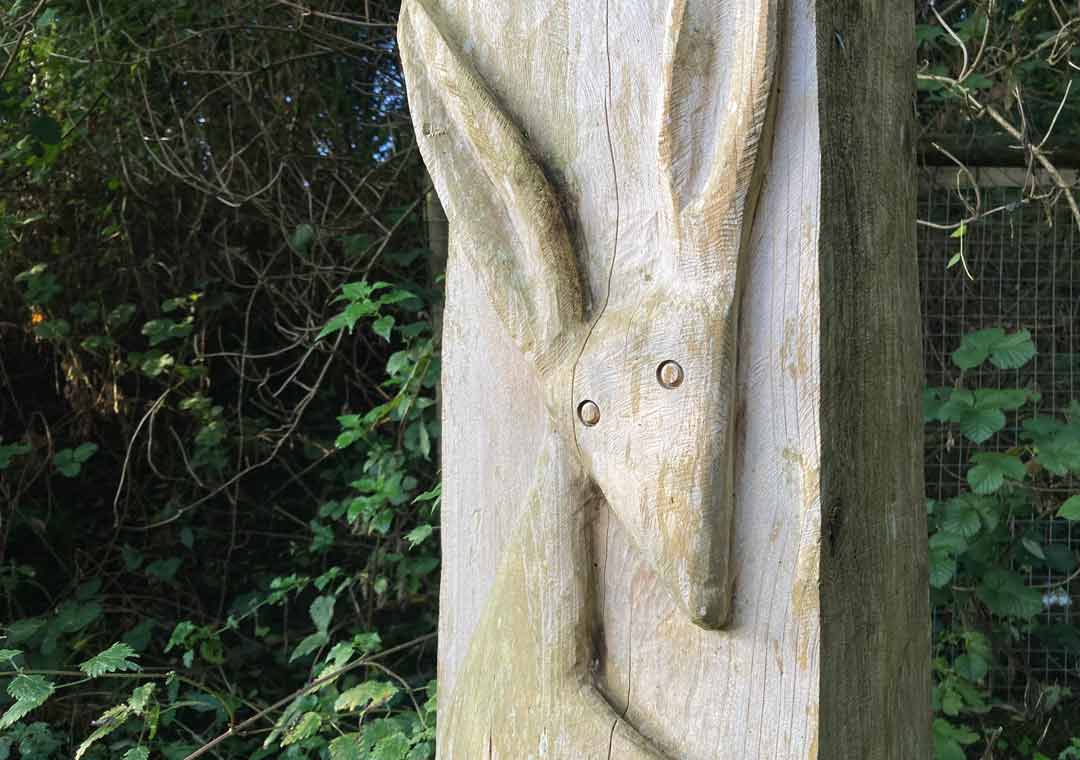 Enter the woods from Four Acre Field or Cirencester Amphitheatre and you’re greeted by wood posts, beautifully carved with expressive animals like owls and foxes.

There are six carved posts to look out for.

Walking through the woods takes you up and down a series of hills and every effort has been made to make it as easy as possible to traverse, with hand-rails and steps. However, some areas can get muddy in wetter months and the complex is largely inaccessible to wheel chairs. 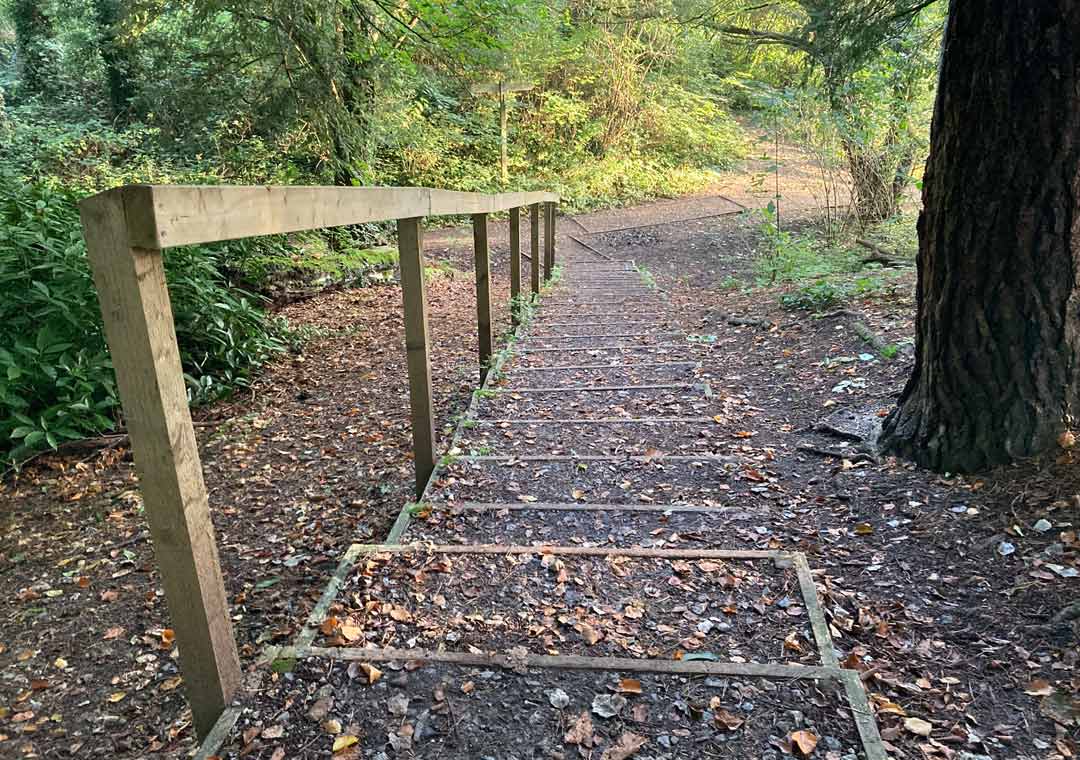 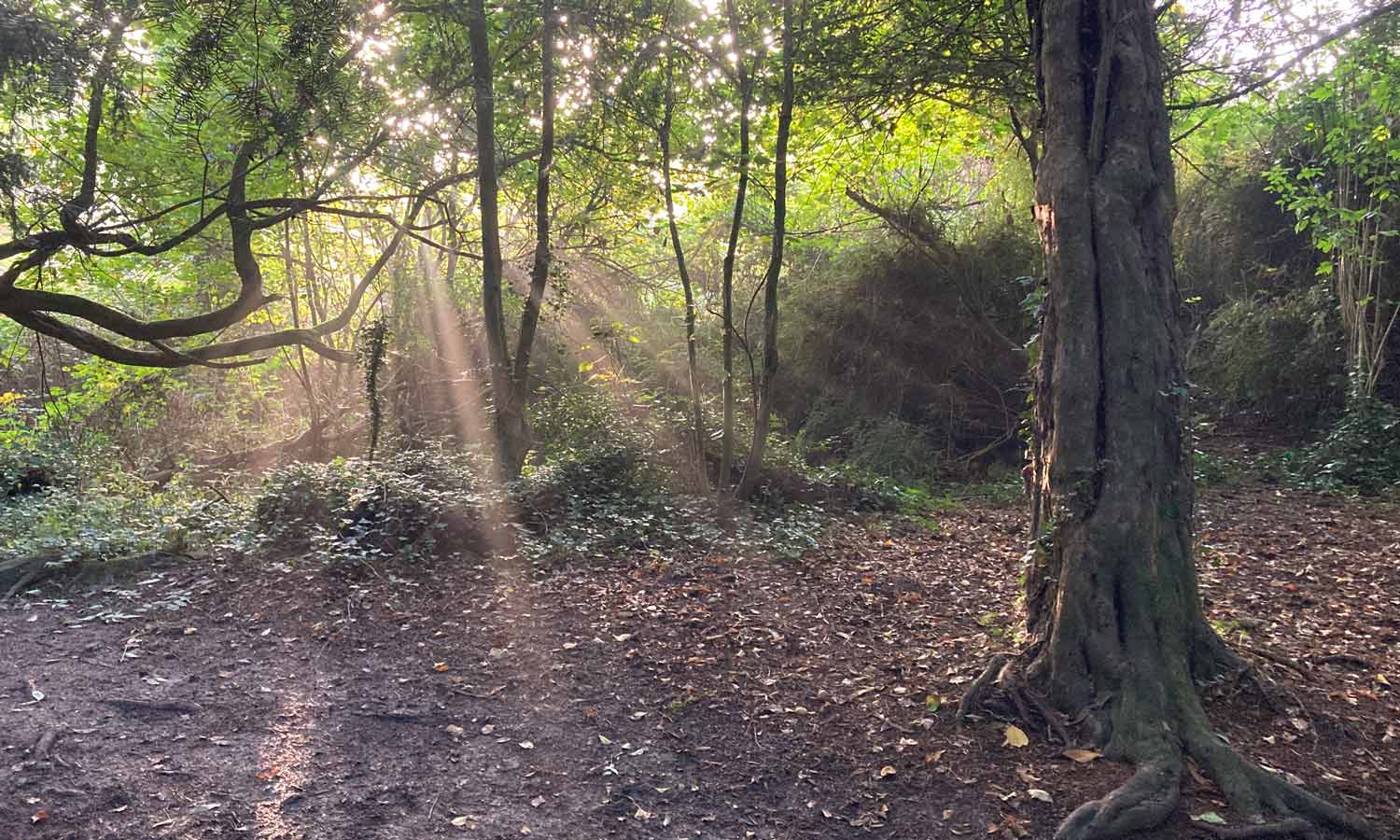 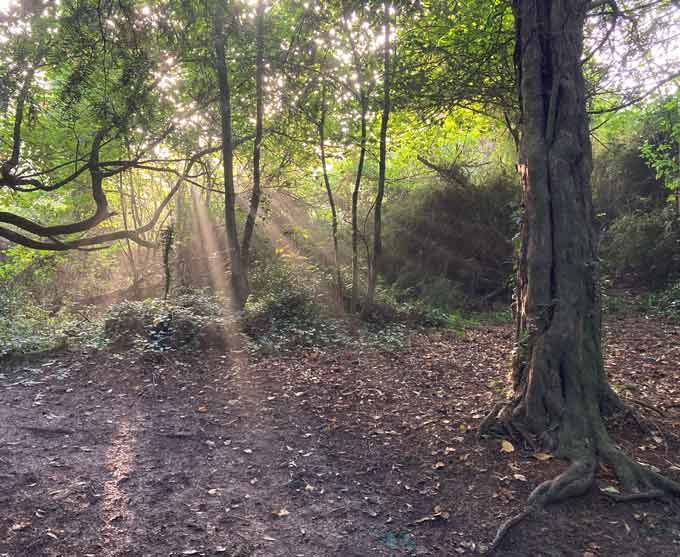 Rays of sunlight pierce through the branches on the south eastern fringe of Querns Wood in September 2021.

Where is Querns Wood?

You can enter Querns Wood through Four Acre field, Cirencester Amphitheatre or from Cirencester hospital. Both Chesterton Lane and Cotswold Avenue have parking for cars.

Getting there on foot 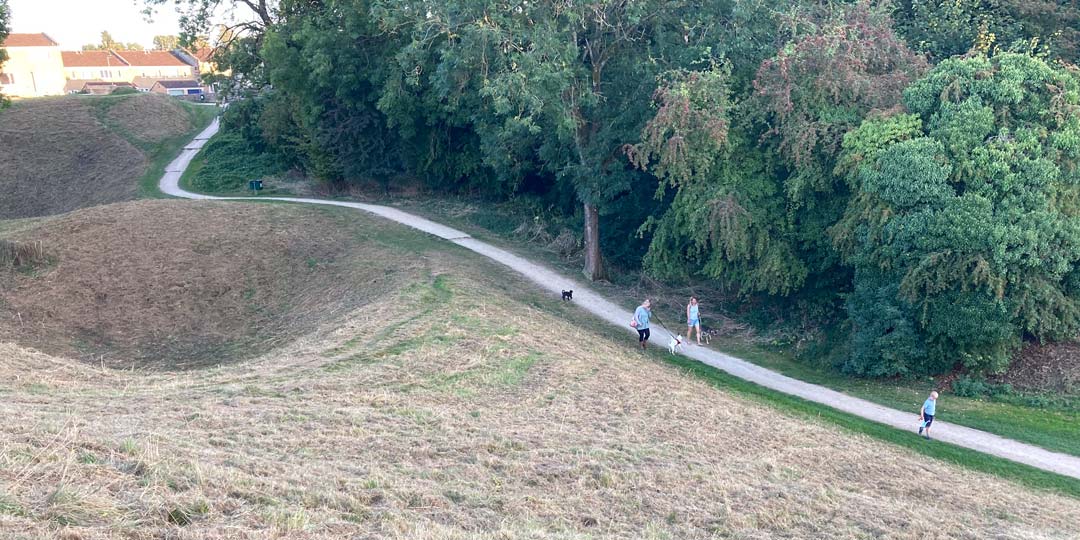 It’s about 10 minutes walk from the town centre. Follow Sheep Street up the hill and over the bridge that crosses the bypass (A429). From the bridge you’ll see brown “Roman Amphitheatre” signposts. Round the bend onto Cotswold Avenue and the entrance is just up the hill on your right.

Getting there by vehicle 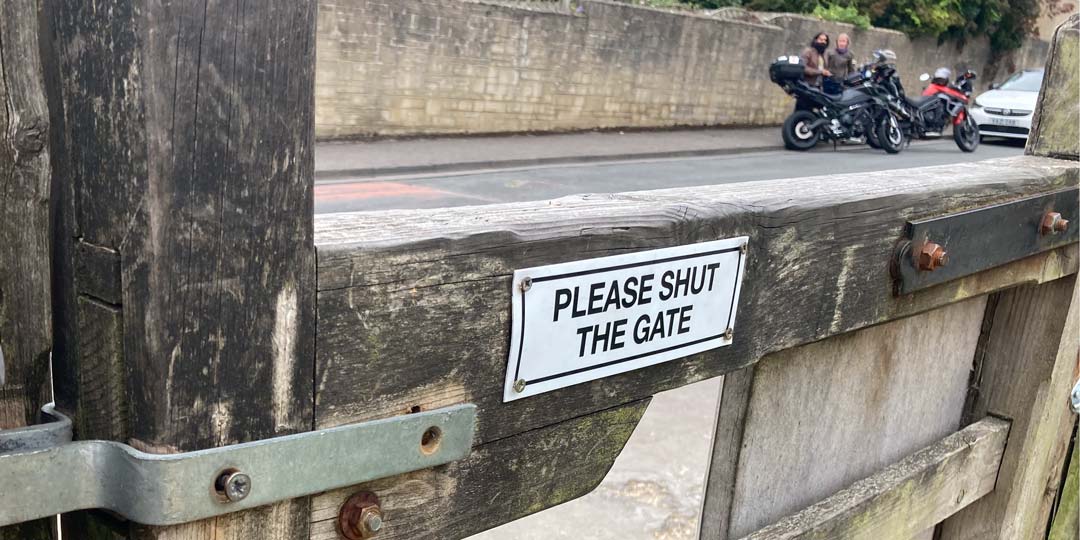 At the bottom of Cotswold Avenue you’ll find the Scout Hut carpark, where visitors to the Amphitheatre can park. Just up past the Obelisk you’ll cross a little bridge and follow the path that leads up to the Toposcope.

Follow the path alongside the Amphitheatre and Querns Wood is ahead to the left.

Querns Wood began as an arboretum, planted by Charles Lawrence alongside Querns House, the large stately home he built in the mid 1820’s which today is the main building of Cirencester hospital.

The word “Querns” comes from the Anglo Saxon word “crundles” meaning quarry, which itself tells a part of the story of the area. There is evidence that the Romans excavated exensively, making use of local limestone for building and indeed the depressions and hillocks around the amphitheatre and throughout Querns Wood are testiment to this.

Discover a piece of Roman Corinium

Just outside Querns Wood next to Cirencester hospital lies a fascinating item from ancient Rome. A stone coffin, originally found in the Roman cemetary beside the Fosse Way, the old Roman road to the north east of the town. 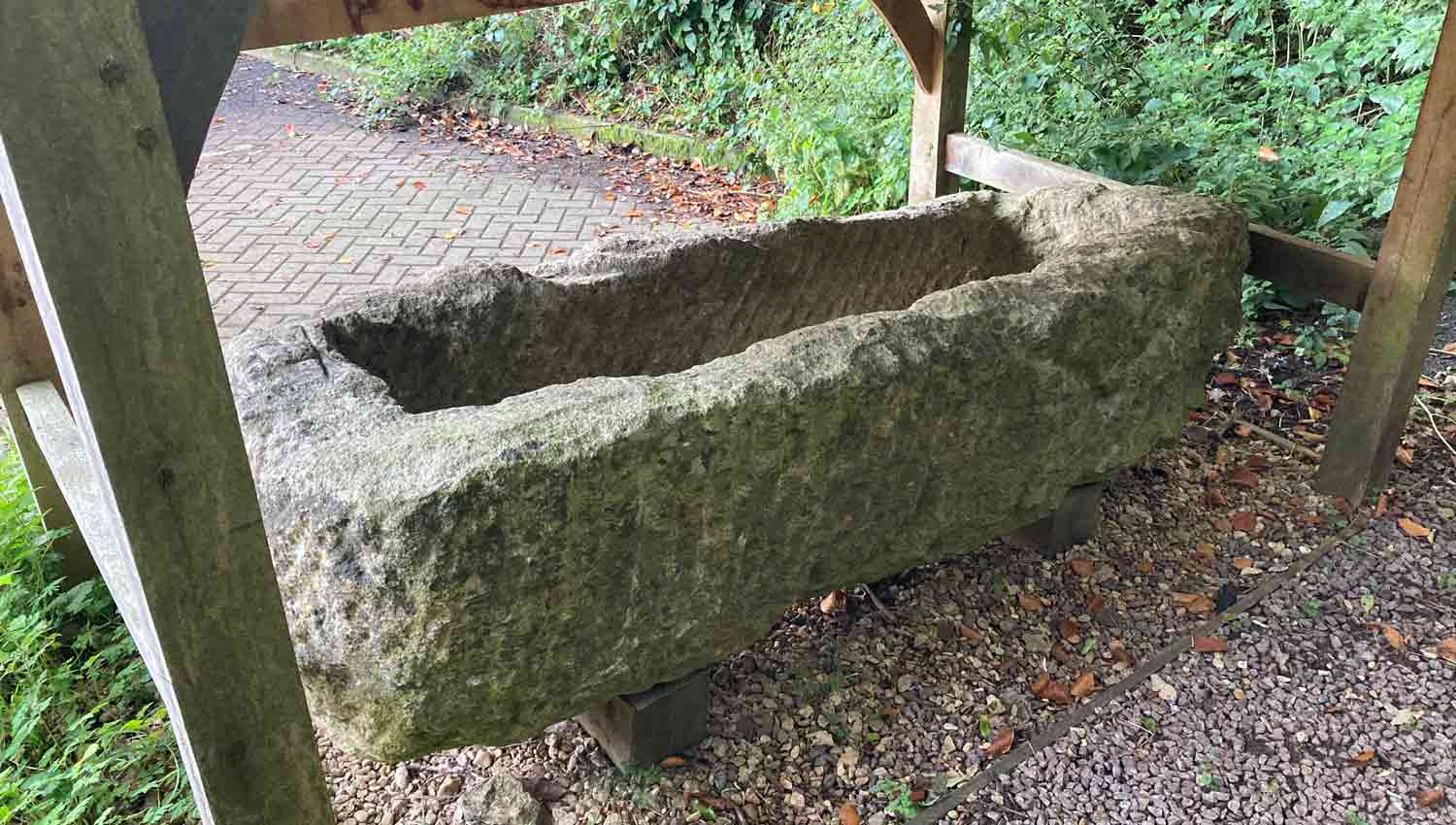 It’s not certain who was buried in the sarcophagus, but it is known that only the very wealthy could afford to have their resting place made of stone. 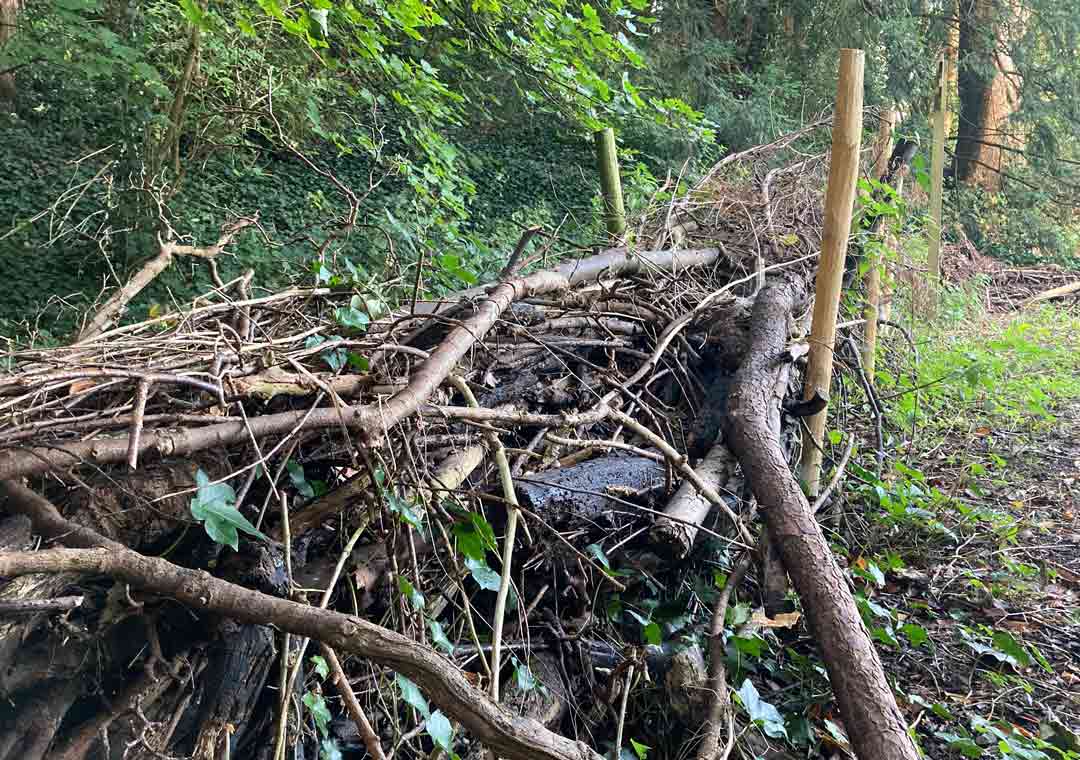 In several parts of the woods you’ll see natural fencing made by dead hedging: using branches fallen from the trees to create a habitat and food source for insects and small animals.

Over years the branches and other dead material rots into the ground, feeding the soil.

Discover more about the history of Cirencester and the Amphitheatre 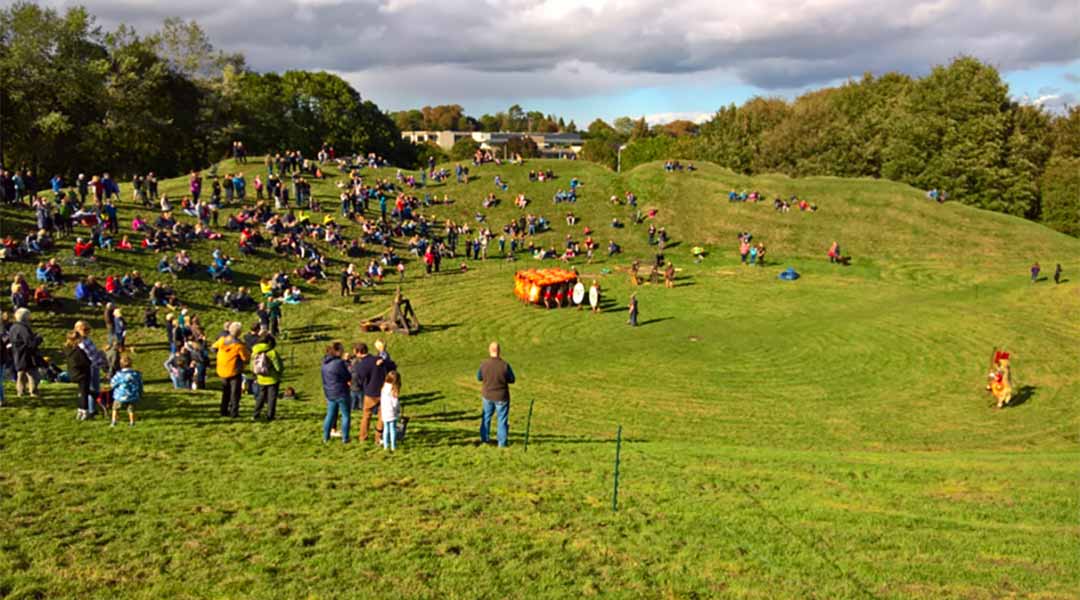 Discover one of the hidden’s jewels of Cirencester, and one of the most historically significant landmarks in Gloucestershire. 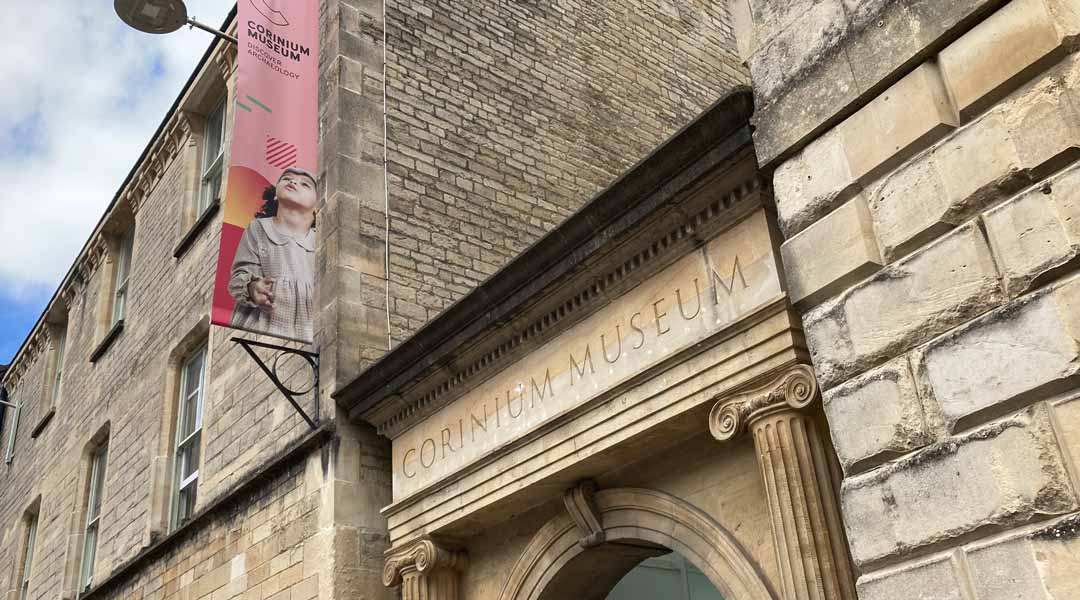 Bringing Roman Cirencester to life like nowhere else, the Corinium Museum houses a treasure trove of artifacts and information.